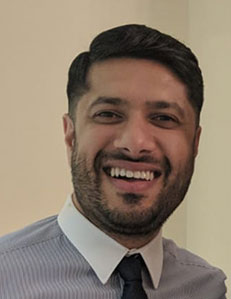 Vipul qualified from the University of Bristol in 2000 and spent his early years in NHS general dental practice. Continually wanting to update his skills and knowledge, he first completed his 3-year Diploma in Postgraduate Dental Studies (DPDS), and has transferred to the Membership of the College of General Dentistry (MCGDent) following completion of a Diploma in 2007 for the (now historic) Membership of the Faculty of General Dental Practitioners (MFGDP). He also spent a year completing his University College London (UCL) Eastman Restorative Certificate in 2007. The Endodontic component of this certificate course further ignited his interest in Endodontics and led him to his Master’s Degree (MSc) in Endodontics, which was awarded in 2010 following completion at the world renowned UCL Eastman Dental Hospital. Since 2008, Vipul has limited his practice to Endodontics, accepting referrals from colleagues from all over the South East of England, including his previous appointment in Harley Street. Vipul has been a registered specialist in endodontics with the General Dental Council since December 2015.

Vipul is also a Clinical Teacher and Lecturer, from 2011-present he has taught on the Endodontic component of the Eastman restorative Certificate (the very course he completed himself in 2007), and from March 2013 to June 2016 he taught the 5th year undergraduate students at King's College London. In November 2013, Vipul completed the Train the Trainer course in Geneva, Switzerland, enabling him to work alongside Dentsply Sirona in organising courses for postgraduate education. As of July 2014, Vipul started providing face-to-face Endodontic teaching at LonDec (Waterloo, London) and Webinars (web-based seminars) to national and international postgraduates participating in the Distance Learning MClinDent in Prosthodontics based at Kings College London.

As of the summer of 2015, Vipul is a committee member of the The Langham Endodontic Study Club, which aims to meet the continuing educational needs in the field of endodontology of postgraduates with MSc/MClinDent (endodontics) and practitioners limited to endodontics.